I will admit that my knowledge of engineering is mostly gleaned from customers over the past  9 years or so. I can hold my own with woodwork but metalwork and engine mechanics are still a foreign language, so please forgive any gross errors (I welcome corrections and will edit as and when).

I normally have a tray or two of cutters, chucks and lathe materials for you to browse through, although my stock is erratic and I am debating selling off what I have and starting over. As shown on the Power tools section I have picked up a decent metalwork lathe along with a Jeweller’s lathe. 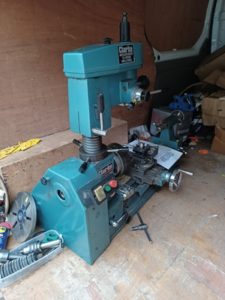 Ronnie Barker definitely missed a trick here. Taps to the common world are for water, other liquids or gases aren’t they?

Taps, in this case, are for making screw threads inside a pipe. What makes it more complicated is that there is no real standardisation of thread sizing and pitch. The nearest was the Whitworth which had a standardised pitch and imperial widths. BSF, have different pitches but still use imperial widths. UNC is a standard coarse thread and UNF the complementary fine thread, both using Imperial widths. To complicate it further American standards are not the same as UK. Metrics are of course all in mm and have, to my knowledge 3 basic pitch variants: 1, 1.5 & 2, but larger ones can have up to 3.5. In general, the pitch increases with size so and M3 will have a 1mm pitch while an M6 tends to be 1.5

Dies make the corresponding thread onto the bar.

I have literally hundreds of taps, fewer dies. About half are Whit, but I have quite a good selection of metric at present, along with BSF, UNF, UNC etc. I have several very large pipe threading sets and some equally large single taps. Many of which are Conduit (sometimes labeled “gas”), or BSP

I am now stocking a reasonable Tap & Die set from BlueSpot  with M3-M12 tap & Dies that should do more than just clean.

I now have very wide selection of tap or die wrenches of varying designs. Ratchet ones are usually new around £5.

Manual ones vary from £3-£15 according to size and quality.

For cutting thin sheet metal. See also the Aviation Style. Basic snips are £2. Decent Aviation ones can be as much as £8.

I usually have a selection of Copper, plastic, or hide hammers in varying state of wear. I cannot get, or replace Thor(tm) heads as it requires a 50lb press and they will not sell to anyone who does not have access to one. All I can do is clean up the surfaces. I sell them between £3-£5.

I also often have chipping hammers for welders, and some oddities.

Hack saws are the ones for metal. Full size is 12″, but there are some that only take a 9″ blade. Good ones are adjustable. Older frames tend to be cast metal or aluminum.

Despite the name they are not just for kids. The blades are a little finer than the big version and cut very well.

I now have a Jeweler’s Saw with 144 blades

I got fed up with being asked, so I bought a reasonably decent one… but no one wants to pay £12 for it.

Believe me, they are hard to get in decent condition, especially with the 45 degree and half moon attachments (and a metric scale)

I am now carrying a cheaper £8 version… You get what you pay for!

I may have metal squares or depth gauges at any one time.

Let’s admit it, most people nowadays want digital verniers. The £8 ones are a waste of money (IMHO).

Most of the micrometers I have are imperial, I sell them at £3-£5 each. Some have boxes or cases.

I get manual verniers fairly often and occasionally do get a decent second-hand digital one, but it doesn’t stay on the stall long, priced between £8-£25.

Steel rules and measures, are usually imperial and often tarnished beyond my ability to restore. Prices range from 50p upwards dependent on type and condition.

I also carry reconditioned bits and tapered shank ones designed for pillar drills.

I get periodically sheaths, centre bits, reamers, cutters and carbide tips. Nothing is certain. I have several regulars who grab them when they can

Lathes are rare, but I have a glut of them at present. Apart from the Metalwork one shown, I still have the Unimat (hand only, no worm) and a complete Jeweler’s Lathe with spare chuck

Lathe tools tend to be tips and clocks or some v blocks.

I guess this is as good a place as any to put files. The ones for metal are fine, woodwork ones are more coarse as are leatherworking rasps. The ones shown are almost new condition but old steel and no longer in stock. I always have a tray of tarnished / cleaned files, some with handles. 50p for small ones and £1 each for larger ones. And have bought in some new files at £2 each (the price says it all)

There are three basic types. Usually there are several nozzles for different sized rivets

Two-handled. Sometimes has a catching tube . £8-£15 dependant on make and model

One-handed, professional tool, nicknamed a “lazy Tongue”. The new one is £20.

I  have spare rivets of different sizes at present.

I have lumped punches in with cold chisels which is where you will find them.

Now that I am in a Unit I can carry bigger machines and have already had several Pillar Drills and have started carrying a small new one for £100.

For Grinders, Drills and other power tools please go to the Power tool section

Keep your eye on my Facebook page for updates.