I normally have a good selection of planes, chisels, saws, and of course hammers and screwdrivers. Power tools will be in that section.  I have been lucky to find some older squares and bevels recently, and have some new ones as back up. Most of the chisels are second hand and vary in quality. I have at present a reasonably decent new 6mm chisel that was on offer. Saws are mostly second hand, but I have bought in a new Rip and Tenon for those who prefer it. Coping saws I have to buy in to get the spare blades. Screwdrivers are mostly second hand. Multibit ones are in the DIY section. I do get Antique and collectable pieces but my aim is for the domestic or professional user. 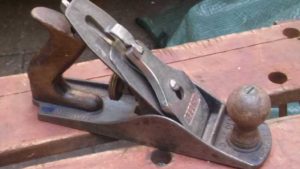 No.4 is the size and shape most people recognize. I have normally at least one. Stanley and Record are the most desirable but there are some other good ones. For taking off tops or bottoms of doors you only need a 110 or equivalent. Prices rise steeply as the size increases. My stock is quite robust at present having all Stanley sizes from 4-7 including the 1/2 ones.

Basically a metal rasp. It is more aggressive than a file and does not keep as smooth or flat as a plane.

The Spoke shave is a plane for smoothing off curves. There are two basic designs, one is flat and the other is bevelled to go round the inside curve.

I have them at £6 each. Please do not ask for Draw knives. If I get one I will tell on Facebook.

It is a shame but wooden planes are now mostly on display. Mine are still in working order. At any one time I will have large and shorter ones and/ or edging planes and spokeshaves £3 for the smaller ones £8 for a big one

For some jobs you can use a rasp or file which I also carry.

I do not have any at present 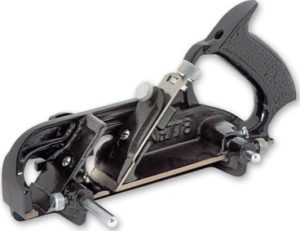 I have several Stanley no 78s, and a Woden version

There were several models made by both Stanley and Record, even Marples made one. They can have as many as 30 different types of blade depending on the model. I have several but none with more than 1 blade.

Very sharp and varying in width from 1/4″ up to 3″ (occasionally) There are two basic designs The mortice having a completely flat face while the other is bevelled (as shown). I normally sell Chinese chisels around £1.50 each and up to £5 or more for the older better ones.

I usually have new stones at £3 and antique ones up to £5. I do not carry the diamond sharpeners as I do not like them.

Carving and / or lathe chisels are harder to come by and don’t stay around long when I get them. I do have a few gouges and carvers at present and some turning Chisels. 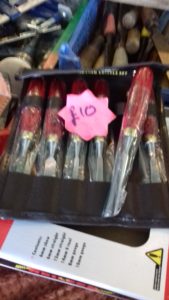 I have trialled some new carving sets and they seem to be acceptable as starters. £20 will buy you 12 chisels.

Simplistically there are two basic saw types. The Rip saw,  (shown above) and the Tenon saw

Again, simplistically the rip saw does a quick crude cut and the Tenon saw is finer and less damaging. Most modern saws are hard pointed and not designed to be sharpened. Sharpening is a long and exacting process to which I am not skilled.

Basic price for second hand is £3 each with up to £10 for Older ones.

I now have a new version of each at £5 each

Thinner bladed rip saws are called Key hole saws. I usually have a nest (or two) of interchangeable saws with a single handle

The coping saw is the tool for sawing round corners. The blade swivels through a full 360 degrees but you have to make sure you don’t get it twisted. £3.50 each with spare blades at 2 for 50p. The older traditional Fret saw is harder to come by and the blades even rarer. I do have some in stock. They have a much higher and narrower frame and a very thin blade.

The Pad Saw has a removable blade which will accept a hack saw blade as  well as the more traditional keyhole style blade. Two screws hold the blade firm. £3-5 depending on the quality of the handle

(Hack saws are in the Engineering section)

I have a wooden (or plastic) angle guide blocks but this is a much better option short of an electric Chop saw.

It will cut any angle between 45 and 90 degrees. The utilitarian blade will cut some metals.

£5-£15 depending on purchase price and quality. I have several. 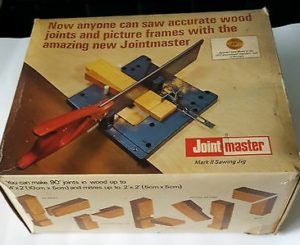 I occasionally get antique Bow Saws as shown, and have several on display at present.

The usual hammer of woodworking is the Claw hammer with the back being able to pull out nails. The other is the Pin hammer with a narrow head for putting in panel pins. Ball Pin Hammers are more for engineering or DIY.

I sell recondition hammers at £3 each. New hammers or metal handled claws are £3 each and specialist hammers £3 upwards.

Wooden mallets are the tool of choice to hit chisels with. (They hurt less if you miss). There are varying shapes, the one shown is probably the most traditional. Traditionally the carving mallet has a round head.  I also carry rubber and specialist mallets/ hammers with plastic, hide or metal heads, prices vary according to make and model.

Pincers are the alternative for getting out nails. I sell them at £1.50 each

For other pliers go to the DIY section 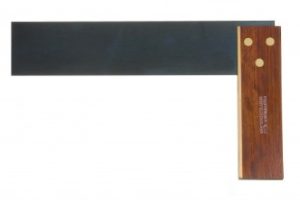 I have picked up a job lot of reasonably decent squares. I have also bought in ones that at least look the part. Engineering ones are made of metal. 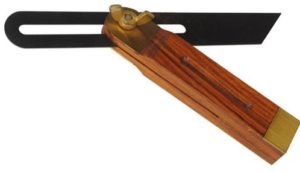 Like the Suares, the better ones are the older ones and again I have picked some up. I also have new ones. £5 will get you one

I normally have a few of these. The better ones have brass sliders with two pins. Price £1-£5 depending on quality

Occasionally I get antique adzes and other old woodworking tools, likewise specialist gauges and turning tools. I will tell you on Facebook when or if I get them.

Despite the popularity of power tools there is still a place for the humble hand drill. You have much more control of both positioning and speed. I normally have a good selection of traditional hand drills and the brace and bit (see below) Price for a standard hand drill is £3, the larger ones are £5+

For big holes into wood nothing beats the traditional Brace and bit. Most of the ones I have are ratcheted. I sell the brace from £3.50 and the bits at £1 each 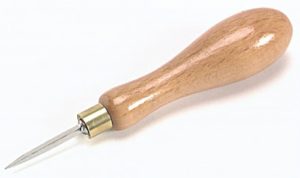 The bradawl has a single tapering point 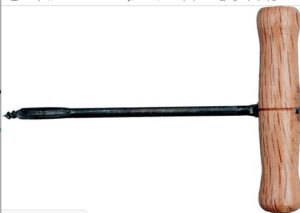 Obviously, I have screwdrivers, bradawls, gimlets and so on. I have a tray of the more interesting tools including several Saw-sets and often sharpening guides. You might find something interesting if you search this tray

Now that I am in a Unit I can carry the bigger power tools including Table or Chop saws, Pillar drills and Lathes. I normally have powered saws, sanders and planers, and of course hand drills and even some battery ones. Bosch models carry a premium.

I have both a new and a second-hand pillar drill, several fret saws and have recently picked up a Record lathe (minus the bars at present).